India is known to be the world’s largest democracy. It is the only nation in Asia to sustain its democratic rights following its freedom from the British government. The only elision occurred  during the Emergency period of 1975-76, and the democratic processes were arrested for the  time being. 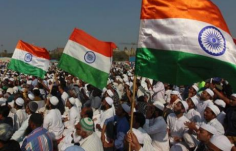 On August 15, 2021, we are going to complete our 75th year of independence. And, in these  75 years, India has seen dramatic changes in several aspects. While there are many things that  India takes pride in, several areas have let India feel down as well (Sullivan, 2014). 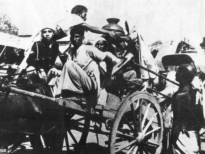 Refugees during India’s Partition (Source- “How Partition Shaped the Businesses That Moved Across Borders”, 2021)

During the earliest days of India’s independence, the nation faced different complex and  challenging troubles. India was partitioned, causing a considerable number of people to get  uprooted. Rehabilitating them was the nation’s fundamental responsibility then (Sullivan,  2014). And while the government was focusing on rehabilitating the refugees, Pakistan  attacked India to accede Kashmir back (following partition, Kashmir had become a part of  India). In the meanwhile, Razakars in Hyderabad rose up against the Indian Government.  Several Maharajas from different territories tried to come up with Independent states. All of  these challenging issues were overcome under the guidance of eminent leaders of India like  Sardar Patel (Karlekar, 2007).

Independent India’s first and foremost objective was to consolidate several fragments of the  nation and assimilate the princely states. The motive behind this assimilation was to unify India  and its citizens (Bose, 1998).

26 January 1950 was a momentous day for India, as the nation was announced a ‘Republic.’  The Constituent Assembly of India adopted a new constitution on 26 November 1949 and  reinforced it on 26 January 1950 (Bose, 1998). The constitution had some unique and new  features that demonstrated a stark contrast with the British colonial rules of the past (Karlekar,  2007). The Indian constitution adopted the Westminster model of democratic government. The  Indian polity amalgamated with federal and unitary forms of government (Bose, 1998). The  new constitution ensured justice, liberty, equality, and fraternity to all its citizens. It also  declared the nation as a secular state, and any act of discrimination against any person based  upon religion, caste, creed, or race was a punishable offense.

The new democratic government also focused on bringing reforms on the socio-economic  dimension of India and thus adopted a ‘socialistic pattern of society. Besides the fundamental  rights, the constitution also developed special provisions for the laden and oppressed  communities. It listed a few castes and tribes in a schedule and denominated them as scheduled  castes (SCs) and scheduled tribes (STs). The colonial masters ruled with the policy of “divide  and rule” and segmented Indian society along religious lines. The new democratic India  discarded those colonial practices ad believed in equality for all (Spipati, 1997).

This was to make sure the containment of communalism. Nevertheless, the history of India’s  independence has seen a number of communal riots and the emergence of different political  parties into power along religious lines (Spipati, 1997). Strangely enough, the political parties  chanting mantras of secularism at times contributed (maybe unintentionally) to the communal  riots. With their keen enthusiasm to safeguard the interests of the minority communities, the  secular political parties started promoting communal interests, essentially creating vote-banks.  As a result, it led to agitation among the majority of communities (Sullivan, 2014).

From the economic perspective, in 1991, the Liberalised Economy policy was brought forward.  India was going through a severe economic crisis as agriculture, and industrial growth was  stagnant. India’s financial sector remained in a state of inactivity. The nation was under  gigantic foreign debt, and a huge financial deficit was coming up (Spipati, 1997). Indian

citizens faced a double-digit rate of inflation. With the new Liberalized policy’s advent, the  growth rate went up by 6.8% during the eighth plan. The foreign exchange reserves gradually  increased, and inflation gradually fell down (Spipati, 1997).

But the advantages of these technological advancements are way more prominent in some parts  of India, and sadly rural India is still quite neglected. Industrial development, advancements in  space application, and nuclear research have not yet completely mitigated the rural  community’s issues (Sullivan, 2014). A large population of India still dwells in unsanitary  conditions, has no access to safe drinking water and healthcare facilities. Even today, several  villages in India live in steep poverty, have no electricity, no schools, and no easy ways of  communication. 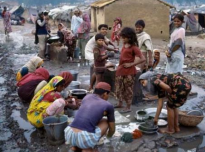 When it comes to diplomatic aspects, India has always been very sincere about its  commitments. Since independence, India has supported and worked for a nuclear-weapon-free  world. India always participates in fair treaties to fortify its defence, like the chemical weapons  convention (Sullivan, 2014).However, unfortunately, there have been massive drawbacks to what it has achieved in the last  few decades. India’s greatest failure to date has been failing to eradicate corruption at different  levels of government. India ranks in 7th position in the list of most corrupted countries in the  world. Corruption is a bigger threat than an invasion from other countries. Another fallacy is  the slow economic growth of the country (Karlekar, 2007). Even today, 30% of India’s  population is grounded by extreme poverty; thus, affecting the overall progress and  development of society. Poverty constricts the domestic market’s size and causes hindrance in  the nation’s economic growth prospects, much like inadequate physical infrastructures  (Sullivan, 2014).

The education scenario of India is also grim. Around 105 million Indian children in the age  group of 6-10 years do not go to school. Even the government has come up with various  schemes and programs to reinforce education for all, and there isn’t a lot of improvement. And  this issue is directly associated with child labour (Bose, 1998). In India, child labour is a  substantial problem distorting the nation’s economic growth process. Some of the major  reasons for child labour in India are poverty, lack of education, wage structure, and massive  backlog in creating new job opportunities. According to the reports, India has a backlog of 9  million job backlogs, which were supposed to be created in the last decade and a half (Karlekar,  2007).

To eliminate the menaces from Indian society, we require joint efforts. There should make a  massive shift in the attitude among employers (Bose, 1998). The health and welfare executives  must put efforts into encouraging and implement family norms, particularly in the rural and  under-developed regions of India. Also, there should be a significant improvement in the  working environment and economic conditions of the adult employees (Spipati, 1997).Keeping in mind all the challenges India faces in the last few decades, today, the nation is  craving for growth and change like never before. According to the reports, nearly 65% of  India’s population is below the age of 35. This makes India one of the youngest and dynamic  nations in the world (Mitra, 2021). As an aspirational nation that is also digitally enabled, India  is looking forward to nurturing its skills and finding new growth and development  opportunities. Thus, India’s present government has come up with a comprehensive strategy at  the national level, defining lucid objectives for the nation as it celebrates 75 years of  independence. The strategy has covered 41 crucial aspects of India. 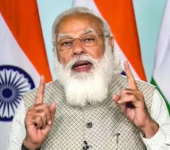 Prime Minister Narendra Modi has explained this complicated exercise in a simpler way.  According to him, “The Strategy for New India @75, put together by NITI Aayog, is an attempt  to bring innovation, technology, enterprise and efficient management together, at the core of  policy formulation and implementation. It will encourage discussion and debate, and invite  feedback for further refining our policy approach. We believe that economic transformation  cannot happen without public participation. Development must become a Jan Andolan (public  movement) (Mitra, 2021).”

Thus, India, at present, has accepted one of the biggest challenges of the modern era. It looks  forward to establishing economic independence through non-violent methods. Corporate India  has a crucial role to play in this regard. The main objective is to conquer hunger, unemployment

and eliminate other menaces of Indian society. The true success of democratic India will  depend upon the successful implementation of the strategy, as mentioned earlier.

Users not registered with Strictlylegal can Email us their content and the same are posted through this account. In case of abuse, kindly let us know at Contact@strictlylegal.in

After Successful Payment, you will receive the download link in your Email ID & WhatsApp.